Migrants’ Challenge to the Philippines Bureau of Customs 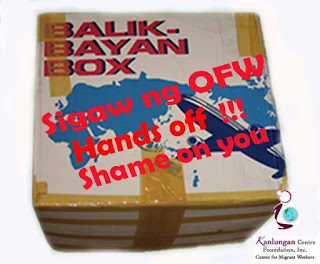 Migrants’ Challenge to the Philippines Bureau of Customs

‘Handle  with  care’ - this  is  the  note usually attached to the balikbayan box. This box has come to represent the traditional way Filipino migrants extend their love and affection to their loved ones back home. The sacrifices of every migrant worker is somewhat eased whenever they connect with their families by sending their remittances  and  the much awaited balikbayan box.

The  recent attempt by the Bureau of  Customs,  headed  by Commissioner Alberto Lina to impose random physical inspection of balikbayan  boxes  in  order to  counteract smuggling and loss of revenue shows blatant disrespect for this important family tradition and all  migrant  workers. These hardworking people were responsible for a record-high contribution of USD 24.3 billion in remittances in 2014, yet they are disrespected by being likened to smugglers and their important family connection pursued for careless disruption.

What did this proposal reveal about the political issues and financial interests that surround this issue?

1. Commissioner Lina  instead of targeting  the  migrant  workers and tarnishing them with petty criminality, should focus on the big-time smugglers and the enormous amounts of vital revenue lost to our impoverished people. How much revenue is lost on smuggled luxury cars and items for the rich?  How was it possible that large containers of waste  coming  from Canada were not detected  by our customs and  able to enter  the  country freely?  We  want to see big smugglers  put  behind  bars first, then  perhaps  the  office  might  gain some credibility.

2. Forwarding  companies  like that of Commissioner  Lina’s  business  Air 21 , which has an average annual shipment of  5 million balikbayan boxes would definitely have benefited from the stricter rules. Private  forwarding  companies already  have  easy  access to their
customers data thanks to the poor data protection associated with tracking of boxes.

Subsequently, migrant workers are now routinely bombarded with advertising. Additionally inappropriate use of this data by his company allows government agencies to forward documents and notices pertaining to labour cases to migrants – how much profit does his company make from this?  How much revenue is lost to the duty exception given to selected forwarders?

3. There  are  numerous complaints of lost and damaged  balikbayan boxes from migrants  and  their families. Is the government not concerned about the desecration of the box that connects filipino families?  What is the Bureau doing about minimising delay in delivery due to inspection, compensating for lost and stolen items and holding those responsible to account? What legal mechanism is there for migrant workers voice to be heard, apart from resorting to social media to complain?

4. Before subjecting the migrants care packages to scutiny, let us first open the accounts  of  employees and all  officials  working in the  bureau. For every Filipino it is an open  secret that the  Bureau  of  Customs  is tainted  with corruption  and  bribery  issues. Even  shippers  and cargo forwarders  will attest  to  the  rampant  corruption. Whilst migrant workers and their activities come under ever increasing surveillance and control, transparency and accountability of government agencies continues to remain elusive.

5. It is appalling that this issue has been  exploited  by  political rivals of the current  administration  and even aspiring presidential candidates to boost  their  political  campaigns. This insensitivity  demonstrates how politicians view the migrant workers in general:  as ‘milking  cows’  for remittances and later  as captured  votes for  the  election. Shame on politician’s for using this emotive issue for migrants to advance their political agenda!

There must end to the creation of any policies that place an additional burden on migrant workers. Let us see evidence of real commitment to the social welfare of these filipinos rather than just viewing them through an economic lens. The  government’s focus  should be to  prioritize services   offered  to migrant  workers  and their  families, especially  women  migrant workers who are often  victims and survivors  of  abuse  and exploitation.

Stop harassing the migrant workers and their families!

welcome to the blog of kanlungan centre foundation inc., a premiere organization of advocates of women migrant workers' rights