In Solidarity with All Migrants and Asylum-Seekers 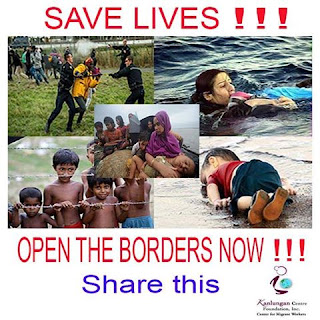 In Solidarity with All Migrants and Asylum-Seekers

We mourn and are deeply saddened by the image of a Syrian toddler named Aylan Kurdi who drowned whilst trying to cross the sea to seek refuge from his war torn country. Aylan was just one of many migrants and asylum-seekers around the world who struggle everyday to escape intolerable situations and seek a dignified life worth living. Whilst asylum-seekers flee war and persecution, there are also many migrants everyday escaping poverty, abusive and exploitive workplaces and forced labour that also demand our compassion and action on their rights.

Migration policies focused on securitisation with minimal humanitarian intervention have dominated over rights-based policy for too long, leading to an enormous number of deaths and untold human suffering. Blocking land borders by building fences between Morocco and Spain has led to migrants risking their lives and dying in appalling numbers by taking the alternate route across the Mediterranean Sea. The UK government has responded only with fences to the people’s suffering in Calais. Whilst Hungary is building fences and blocking the travel of asylum-seekers and detaining them in camps; rather than organising their transport to European countries like Germany and Sweden who are fulfilling their duty to guarantee rights and provide protection.

Labeling the situation a ‘migrant crisis’ and now ‘refugee crisis’ has contributed to the justification of securitisation policies. Unfortunately this also conflates with humanitarian migrant organisations use of ‘crisis’ language in their rush to help.

In reality, 86 percent of the world’s refugees are living in developing countries. The influx of migrants into Europe in 2015 is only 0.068 percent of the EU's population, thus there is capacity to accept them. These situations are not something that have suddenly happened - they have been going on for a long duration with states lacking the political will to act and cooperate on recommendations for safe and legal routes for migrants and asylum-seekers. Instead the smugglers have organised their unsafe perilous journeys or they have fallen victim to human traffickers leading to untold human tragedies.

Reframing the people as refugees rather than migrants has also contributed finally towards more compassion and greater pressure on Governments to act with campaigns such as “Refugees Welcome”. As this builds there is immediate relief that asylum-seekers may now receive a more united EU response to recognise and guarantee their rights under the 1951 International Convention on the Status of Refugees. Hopefully given the massive resettlement that is currently required in the world, it will also ignite similar campaigns elsewhere in rich and developed countries.
What will be the impact of this on anti-migrant rhetoric and discourse that undermines rights? Kalungan is concerned that in a similar way to the so-called ‘boat crisis’ in South East Asia, that there is a false dichotomy being constructed between migrants and refugees, with the latter being privileged as ‘more deserving’ of our empathy and protection. Bangladeshis who suffered at the hands of human traffickers had rights too and were no less deserving of our compassion and rights-based intervention than the Rohingya. We must challenge this construction to avoid negative long-term effects in the politics of protection of migrants.

Let us act in solidarity with all migrants!

We call for the following for all migrants and asylum-seekers in Europe:

1.       Immediately expand and intensify the search and rescue operations of the women, men and children, whose lives remain at risk at sea in overcrowded boats.
2.       Provide organised transportation to countries fulfilling their duty to guarantee their right to asylum.
3.       Provide rights-based protection in all EU countries and immediate medical attention with state funding.
4.       Release those who were inhumanely confined in detention. Provide humane treatment and safe
open accommodation for all.
5.       Comply with the obligation to protect children as per the UN Convention on the Rights of the Child, (1989).
6.       Do not send them back to face persecution and death - Respect the norm of non-refoulement.
7.       Facilitate access to justice with free legal services.
8.       Monitor and protect these people from any further human rights violations.

Also,
9.       Guarantee their rights under the 1951 International Convention on the Status of Refugees - grant asylum, not just humanitarian rescue and assistance.
10.   Challenge consistently any dehumanising anti-migrant language and behaviours, including myths and negative stereotypes.
11.   Revoke laws that prevent family reunification
12.   Suspend the Dublin Regulation, under which the EU country where a migrant first arrives is supposed to process the migrant's asylum claim.
13.   Act now to create a comprehensive, co-ordinated and ambitious regional binding solution for safe and legal routes for all migrants into Europe. Do not externalize the problem risking even worse human rights violations.

Recognising our common humanity regardless of nationality, race, religion or other status
Let us always act in solidarity to guarantee the rights of all migrants to protection and justice everywhere in the world.

welcome to the blog of kanlungan centre foundation inc., a premiere organization of advocates of women migrant workers' rights